Two years ago, I boarded an international flight for the first time in my life. It was a British Airways aircraft, and I was flying to Boston, USA, with a layover at London, UK. The aircraft was huge indeed. Since the first flight was from Bombay to London, there were Indian as well as non-Indian (all White) crew members. The Indian women were slim and near-skinny, but what struck me most was the rest of the White cabin crew. They were not slim. And they were good at their jobs.

The next flight, from London to Boston, had an all-White crew. This time too, there were several men and women in the crew who could be best described -- in the words of today's moralistic media -- as "fat". I was nearly shocked to see them. The fact that they wore smart uniforms and were swift in their job of taking care of both kind and cranky passengers, was not enough to get my mind off their fatness.

Through my eight months in the US, I took several flights on many different airlines, and witnessed the same thing: the cabin crew's body size or age did not matter. Their were amazing in their job, and the air-hostesses on South West Airlines had a special knack of joking on the aircraft, about wearing those safety belts and the mad landing in truly windy Chicago. One air-hostess seemed old enough to be my mother, yet was very strict on baggage placement rules. She was doing her job. One male cabin crew member was huge -- he had Hrithik Roshan-style biceps and a pretty good big bum, yet not for a moment did he get stuck in the aisle or slow down in his pace to meet the demands of passengers on a long flight. The envelope given to every passenger on a British Airways flight, to make a donation to some NGO, has the photograph of an air-hostess with a child. The air-hostess has a beautiful smile, and is, well, fat. And I am guessing they picked the photogenic of the air-hostesses for this photograph. 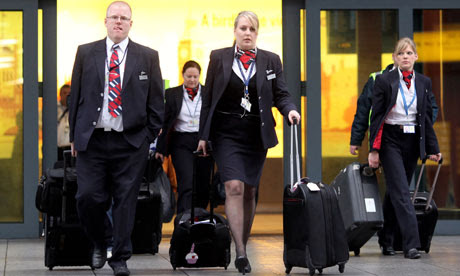 Looking at them, I could not for a moment forget the cabin crew members of airlines in India, and the increasing insistence on their image. Why, so many fairness creams ads have depicted a successfully-fair girl to have secured a job as an air-hostess. Many years ago, when, in the desperation to find any way to see the world, I was checking the ads to hire air-hostesses, I knew I would never make the cut because only those with a minimum height and weight and waist length could apply. There was no room for intelligence there; it seemed like a different version of being on a catwalk. The ads for recruitment - and even the current crop of air-hostesses in India - are made to look as only eye-candy during your time amid clouds. And perhaps this is why taking up a job as an air-hostess is looked down upon among upper-middle-class Indians: because of the way it has been portrayed.

And why do I write this now? Because of the recent news whereby the DGCA (Directorate General of Civil Aviation, of the Government of India) has issued strict requirements on body weight, vision and hearing for cabin crew members in India. While I understand that requirements of vision and hearing are crucial, and the overall health of any employee is crucial, I doubt that health is the main concern here. Even if it is, I suspect airlines would now push their already-skinny air-hostesses to go on some crazier diet, just so that they can keep their job. 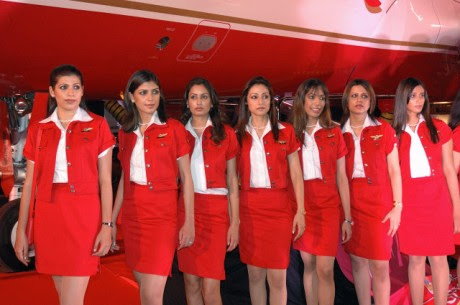 I am saddened by this news, because it is an attack on a profession, and a confirmation that only looks matter. It is a reiteration of the fact that Indians value fair skin and a skinny body over professionalism and true health. I have heard enough "jokes" from Indian men, who say how flying by Indian Airlines is a such a sad experience, because of the "aunties" as air-hostesses (because the air-hostesses on the Indian Airlines aircraft wore sarees and indeed, they were not pretty-young-things, unlike in the private airlines).

Back in India, and having taken a few flights, I am shocked how passengers continue to speak on the mobile phone even when the aircraft is on the runway, and how, more importantly, cabin crew members often choose to ignore such careless passengers. While many might deny the co-relation between talking on the mobile phone and air crashes due to issues with electronic signals, I would want to be assured on the flight that nobody is jeopardising my safety. On at least three instances while flying in the US did I notice cabin crew members raising their eyebrows and voices, like a principal, admonishing a passenger to "turn off that goddamn phone now". Not so in the flights in India. I wish the DGCA - instead of attacking the bodies of the cabin crews - gave more teeth and power to the cabin crew to ensure greater safety on flights, by protecting those efficient workers who get careless passengers to behave on the flight.

I am guilty for having once imagined being an air-hostess to be the next thing to do for those girls who did not make it to the finals in beauty queen contests. I am glad my perspective has changed, towards seeing that being a cabin crew member is work, big time important work. Let's keep their body shape and size out of their work.